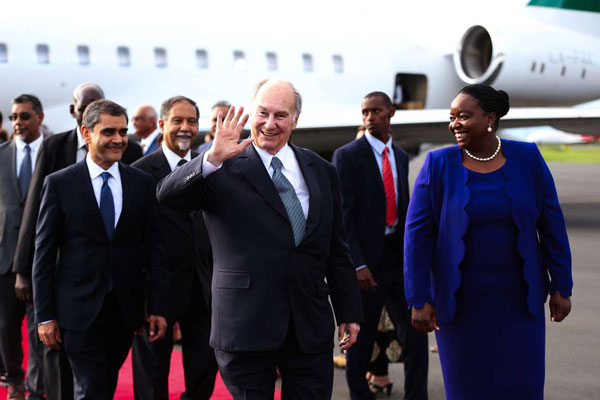 The Aga Khan, 49th hereditary Imam (spiritual leader) of the Shia Ismaili Muslims arrived in Kenya on Thursday, on a visit that marks 60 years since his accession to his role of spiritual leadership.

The visit is part of a year-long celebration which commenced on July 11, 2017. The visit marks 60 years of his leadership and commitment to faith, pluralism and improved quality of life.

Upon his arrival, the Aga Khan was received by Kenya’s Cabinet Secretary for Foreign Affairs and International Trade Dr Monica Juma as well as leaders from the Ismaili community and the Aga

While in Nairobi, the Aga Khan was expected to meet with President Uhuru Kenyatta. The meeting was an occasion to celebrate the longstanding partnership between the Imamat and the Aga Khan Development Network.

The AKDN has been engaged in the development of Kenya for over a century and has enjoyed a strong relationship with the government, based on partnership and collaboration in together, driving the development agenda of the country.

An Agreement of Cooperation for Development was signed with the government of Kenya in 1996 and recognises AKDN’s contributions to national development, while creating an enabling framework for its activities.

AKDN is engaged in every sphere of development in the country: From social, cultural to economic.

Through its several interventions in education, health, poverty alleviation, finance, insurance, tourism promotion, conservation and civil society strengthening, it has been improving the quality of life of Kenyans, some of whom live in the poorest and most resource challenged areas of the country.

Every year the AKDN touches the lives of over 7.5 million Kenyans directly and four million indirectly.

As in many other traditions, Jubilees mark important anniversaries. The Diamond Jubilee celebrations therefore represent both a recognition of the Aga Khan’s work over the past 60 years and an opportunity to launch new initiatives.

In October last year, the Aga Khan launched the Global Centre for Pluralism Awards – among the recipients was Kenyan Alice Nderitu; peacemaker, conflict mediator and gender equality advocate, who was recognised for unparalleled and sustained commitment to building more inclusive, peaceful societies.

The centre, a state-of-the-art facility for technology-based learning, will transform the education of health professionals through the use of simulation and virtual reality technology to develop knowledge and skills before treating patients.

In February, he inaugurated the Sunder Nursery in Delhi, one of the cultural restoration projects of the Aga Khan Trust for Culture, aimed at creatively combining monuments, forest and nursery functions within one interactive experience.

All projects are developed with the ultimate goal of improving quality of life for all.

In Kenya, past Jubilee initiatives have included the Platinum Jubilee Hospital, which was inaugurated by the Aga Khan in 1958 and which is now the non-profit Aga Khan University Hospital in Nairobi; the Diamond Jubilee Investment Trust, which started off as a community lending enterprise, and grew into a major retail financial institution – now called Diamond Trust Bank (DTB) – that helps promote small and medium enterprises across East Africa; the Jubilee Insurance companies, the largest providers of life and medical insurance across East Africa and Asia; and the non-profit Diamond Jubilee Schools in India and Pakistan, which were among the first to educate girls.

Ten years ago, during his Golden Jubilee, the Aga Khan expanded the role of the Faculty of Health Sciences at the Aga Khan University and Heart and Cancer.